Who invented french toast? Would you believe it if I told you this is definitely not french hahahahhah although the name suggests? of course there are versions of french toast in so many countries and the French have a version called pain perdu but this was actually an invention of  Joseph French and he wanted to name this dish after his name French and wanted to call it French’s toast but forgot the apostrophe and then it became french toast. What a funny story hahahhahah

When I was a chef in 5-star hotels and running breakfast shifts. French toast was a must-have dish for breakfast. Different hotels made french toast differently and different types of bread were used and it is a very versatile dish. There is always cinnamon added into the mixture to give that oomph of flavour which also makes it a cinnamon french toast recipe. But if you want the cinnamon to be more prominent then increase the cinnamon and dust it with cinnamon sugar on the top when serving YUMMMM. Oh my god, I am salivating now.

Bread: I am using white brioche bread, but you can use any type of bread I have given a list of bread that can be used further down the article.

Cinnamon: This will give extra flavour and oomph, you can also add any type of flavouring such as orange, almond extract anything you wish

Vanilla: Vanilla flavour is always a good contributor to flavour

Sugar: You can increase or decrease sugar as you like. Since I serve it with maple syrup and dust with icing sugar I have ket the sugar level to the minimum

Eggs: It is important to use egg in this recipe, this is what makes the whole mixture a batter that gives a nice coasting

How To Make French Toast

It is so simple to make french toast, just make the batter by whisking all together or just blending it and then dip the bread in the batter and pan fry with butter. That’s how easy it is and it takes less than 10 minutes to make this dish

French toast batter should be the correct consistency, not too thick, just right so it can cling to the bread. You can make it the night before as well.

how to make french toast in a pan

So the best way to make it is in a pan, with butter, not oil. Butter will add flavour and give that caramelised look. Just pan-fry both sides, remember we are only cooking the batter so this step will be very quick.

Do You Cook Your French Toast With Butter Or Oil?

What bread to use for french toast

How To Store french toast

Once the bread is cooked in the batter storing and eating is not that great in terms of quality but nevertheless, if you have leftovers store in the fridge in a container and reheat in a microwave when needed. If you have remaining batter, you can store it in the fridge for a maximum of 2 days.

You can also check my other recipes here 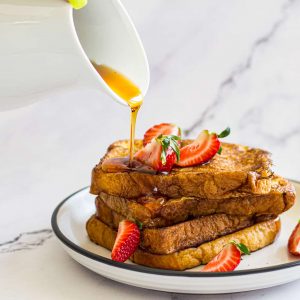