Homemade Churros recipe and chocolate sauce!!! who invented this darn good combo?? whoever it is, it’s a damn good invention. What’s not to like about crispy churros fluffy on the inside plunged in hot chocolate sauce. Honestly, I am sure you are drooling the same way I am right now. Making churros at home can be so easy and rewarding at the same time

The difference between churros and doughnuts is that doughnuts take a longer time to make and have a longer process, because there is yeast in the batter and you need to rest it before deep-frying but making churros from scratch can be done in 20 mins tops and its just a mix and pipe job and voila Spanish churros freshly made at home. Churros is more crispy than a doughnut and it’s better served hot rather than doughnut which is better served at room temperature.

Ok enough of me saying how easy it is to make homemade churros from scratch, let the ingredients speak for themselves. All you need is milk, water, salt, sugar, butter, flour and eggs to make the churros batter.

Churros batter is quite sticky and the secret to good churros is getting the consistency right. Churros batter is exactly the same recipe as the choux recipe that you would make for eclairs. The stickiness is what will make the churros crispy and fluffy on the inside.

Now the beauty of churros is that once it is fried, it gets rolled in cinnamon sugar, and I know at that point you will be tempted to eat it all, but hold on, dipping it in the hot chocolate sauce is much more delicious!!!

The beauty of this recipe is the chocolate sauce is a dip, so you can double dip it, triple-dip it any way you like. Also for parties and gatherings, you can do a DIY churros platter. with freshly fried churros, strawberries and chocolate sauce or even a selection of sauces.

How to cook churros

Cooking churros is fairly simple, you need a pastry bag for churros, which gets filled and then piped straight to the hot oil. To cook it we would use a shallow fry rather than a deep-fry and make sure you use a saucepan that is large and has a wide surface, that way you can pipe many churros at once. The easiest way to pipe is, cutting the churros with a scissor after piped. make sure to dip the scissors into the hot oil, so it will not be sticky and will make it easier to cut. Also, make sure to use metal scissors and not plastic scissors

How to make churros crispy

Churros like any other fried item are best served freshly fried and they will hold their crispiness for 15-20 mins and after that it becomes soft. Even after they are soft they still taste good.

How to reheat churros

If you like to make churros in advance and serve later, then don’t dust them with cinnamon sugar, pipe and fry the churros as per the recipe, then when you want to serve, preheat the oven to 180C and crisp them up for 7-10 mins until crispy then roll it in the cinnamon sugar when serving.
Serving churros

You can also check my other dessert recipes here. 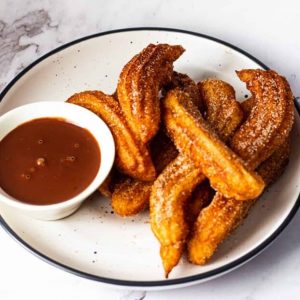