Pol toffee also known as coconut toffee or coconut rocks is a traditional Sri Lankan sweet made in Sri Lanka. I am actually unsure of its origin or if this sweet is specially made for Christmas but it is definitely something really popular during Christmas.

As a kid, my mum made pol toffee (Coconut rocks), Kiri toffee ( Milk toffee) for Christmas and made the best pol toffee. Moist and delicious. I still remember when she makes them for Christmas she would tell me, my brother and my dad not to disturb her for 1 hour, that she needs to make pol toffee.

The reason is when making pol toffee you need to stir and wait in one place for almost one hour until it is made. If you move from the stove then the pol toffee texture might get affected. Her favourite colours were pink and green and she would always make 2 colours for Christmas. We would have long chats for 1 hour until she made her pol toffee, oh those are the memories I will cherish forever.

There is pol toffee in supermarkets that I have tasted which are really dry. This is definitely not the type of recipe that I will be giving you, it would be delicious, moist and so flavourful that you will never buy pol toffee from supermarkets ever again. This is my mum’s secret recipe that I am sharing with you all. So if you make this recipe, please leave a recipe rating and comment below.

What goes in Pol Toffee

Can I use fresh coconut for this recipe?

Yes definitely. That’s the best if you can use it.

Sugar: One of the main ingredients to make pol toffee

Butter: Trust me, this adds a depth of flavour to the overall dish.

Vanilla: This is the flavouring that is added to the dish and it is essential as well.

How to make Pol Toffee

How to store Pol Toffee

Pol toffee can be stored for up to 1-2 weeks in an airtight container. My mum used to make this just 1 week before Christmas. After 3 weeks it doesn’t taste great and the texture tends to get dry over time, so make sure to make it just one week before you need it, so you can keep it for a little longer.

The biggest mistake is the mixture not setting or becomes too hard. I can give you all the tips in the world and show you and teach you all the tips, but consistency is something that you will have to do and learn. It might not come out well the first time but that’s ok, you keep trying trust me you will know when it is time to take the mixture off the fire.

When I first made it I kept it too long on the fire, while the texture was great and the flavour was so good, I could have taken it 2 minutes before, now if this happens it is no big deal, the pol toffee will set and taste great the only thing is after 2 weeks the texture will be too dry, that’s the worst that can happen.

If the texture is too soft and you take the mixture out of the fire before it is hard, then it will not set.

If this happens, take it out of the sheet, put it back into the pan and keep stirring until the mixture gets thickened. The only down fault here is that it won’t have the perfect mouthfeel and texture

How do I know when it is the correct consistency so I can take It out of the fire?

Another way to find out is, take a bit of the mixture out and put it on a cooled chopping board or tray, if the mixture sets that means it is good to be taken out of the fire

How long should I keep pol toffee to set

What time should I cut the pol toffee into square

You can also check my other recipes here. 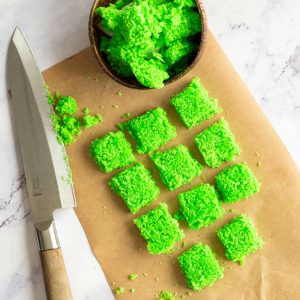